Glow was formed from a writing partnership started in 1993 with vocalist Maria João Branco, later of Kamel Nitrate. By the time we first gigged in 1995 we had been joined by multi-instrumentalist Karl Walinets, primarily on bass. The fourth main member, percussioniust Bagz, now in Dead Silence Syndicate but also an early Orchid-Star guest member who features on Birth, joined at the start of the 2nd album, shortly before he was legally old enough to be at the venues we gigged at 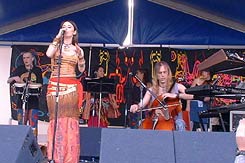 The writing was limited to the 4 of us except one track written with Myo, now one of the mainstays of Orchid-Star, who was the longest standing half of the other half of the act - the Department of Luminosity, a collection of short or long-stay guests - which also included, over the years, dancer Diane Everitt and percussionist Sean Quinn (early member and guest respectively in Orchid-Star), Amazirée and Jo - vocals, Margie Newens, Omar Puente, Sammy Bishai and Jackie Linz - violins, Bianca Janossy - Oboe and Cor Anglais, Nigel Hopkins - trumpet, Steve Lambert - Guitar, Bouzid Adda - bass, Sam Rayner - throat singing and more including a collection of about 11 belly dancers (maximum 4 at a time!)

The band was my primary musical outlet until 2000, playing keyboards, cello, percussion, vocals, guitar and recorder(!)